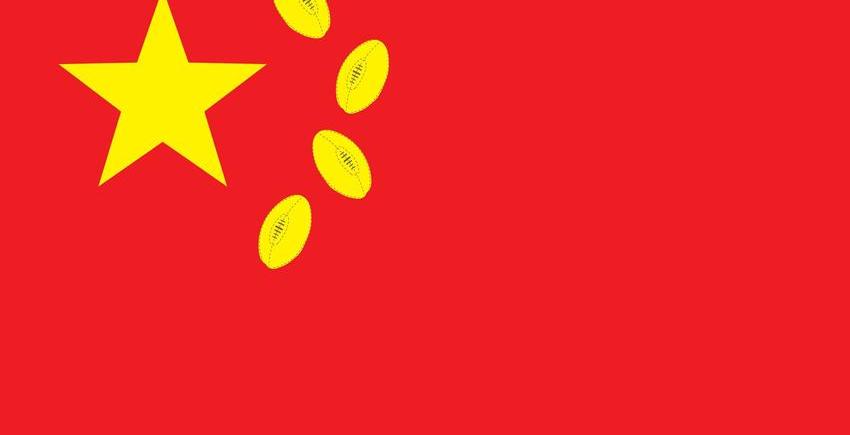 Today, amidst a lot of fanfare, the Port Adelaide Football Club announced its intention to play one home game per season in China—starting in 2017. Attending were no less than the Prime Minister Malcolm Turnbull, AFL top banana Gillon McLachlan, Port chairman David Koch, chief executive Keith Thomas, and Gui Gou Jie—a Shanghai real estate mogul who is tipping millions of dollars into Port in the next few years.

McLachlan waxed that the club had taken another “significant step forwards with its move into China, to further expand its supporter base and build the wider exposure of the club”. Which all seems to fit into an AFL vision of “our game beyond Australia”, committing to support school and university programs in Shanghai, Guangzhou, along with current AFL programs in China.

What that means specifically in terms of cost and resources is anyone’s guess and may ruffle some feathers considering the financial sinks that the AFL continue to fill in the form of GWS and the GCS. Who exactly will join Port for their Chinese home game is not clear at this early stage but the potential rewards are certainly engaging. And here’s why.

According to the wonks and forecasters at the McKinsey Global Institute (a business, economics and policy centre) China’s middle class is already 230 million-strong and in the next decade is projected to grow to 630 million. Other organisations such as Credit Suisse put the figure closer to 109 million, but just to put that into perspective—according to the same Credit Suisse report—the American middle-class now sits at 92 million. It was a much smaller American middle-class which drove a substantial post-World War Two western economic boom, starting with the Marshall Plan. China has always been populace but it’s not just dealing in chemicals, textiles and brittle steel anymore. It is a sophisticated economy not only on the supply side but in terms of consumption patterns. Those middle class consumption patterns will be a global engine this century.

But why does that matter especially for a small sporting franchise like Port Adelaide, sitting all the way over in the Antipodes?

It matters firstly because China does not have an embedded sporting tradition or market. World football is making inroads but it is not necessarily parochial. The top two most followed clubs on Weibo (China’s Facebook equivalent) are Manchester United at 8.9 million and Manchester City at 8.3 million. Coming in third with 5.5 million followers are Guangzhou Evergrande FC—the stars of the China’s Super League who have dominated that competition over the last 5 years, winning every title since 2010. There are three EPL and one La Liga team in the 10 most popular teams. The 10th most followed team is Hangzhou Greentown with 2.6 million Weibo followers. When we compare this to Port Adelaide’s 63.1k Twitter and 168,315 Facebook followers you start to appreciate the scale of the potential market we are talking about.

Secondly, sport has proven to be enormously popular enterprise across the globe—one that appeals to all sectors of the population and especially to people open to commercial and branding opportunities. Apparel, trinkets, football cards, publishing—these are all areas that marketing and licensing people dine out on, as do professional sporting clubs. Everyone gets a taste of a (hopefully) expanding pie.

But beyond money, there’s another reason the burgeoning Chinese middle-class in important when it comes to sport. Historically, when sport first emerges it does so among those who enjoy the time and disposable income to waste on fripperies like games. That was certainly the case in Australia where only professionals and self-employed tradespeople had the requisite leisure time to spend all day chasing leather balls in a parched field or offering forward defensive stroke play on a Saturday afternoon. Meanwhile the proletarians sweated and toiled in Dickensian factories.

Class also explains why Australian Rules football emerged not from boot factories but from the British public school system and was then transplanted into elite private schools like Melbourne Grammar. And why teams like Melbourne (the urban wealthy) and Geelong (the pastoral element) emerged in 1858, while teams from working class areas like Collingwood formed in 1892, owing to the realities of early industrial life.

The American sociologist and economist, Thorstein Veblen, described this phenomenon in his 1899 book ‘The Theory of the Leisure Class’. In it Veblen argues that the wealthy class has historically made ostentatious displays of their consumption practices but also of their leisure practices—which he calls ‘conspicuous leisure’. The ability to participate in or watch sport is, like jousting, hunting foxes, going to a ball or becoming a patron of the arts—all of this is a mark of distinction.

Whether you view sport as an engaging spectacle in its own right—promising the rare treat of the unpredictable in a micro-managed, boring and acquisitive age – and/or accept Veblen’s argument that leisure activities are really about status display, it doesn’t much matter. The reality is that sport is big business everywhere and all sorts of sporting organisations will be throwing their hooks into China and trying to stay on the sporting dragon as it takes flight.

China is not exactly a tabula rasa when it comes to sport but it is clearly in its infancy. The prospects are prodigious for those that batten on early and can stay the course. And this is clearly something the AFL are hoping to do. Whether they get brushed aside as the Chinese middle-class shift into the terrain of world football or basketball or some other competing sport, is hard to tell but even a small slice of the Chinese market would be enormous.

And while there is a distinct possibility that the AFL and Port Adelaide get buffeted and blown away, with a domestic Chinese benefactor they may get some inside running and influence which is of no small consequence.