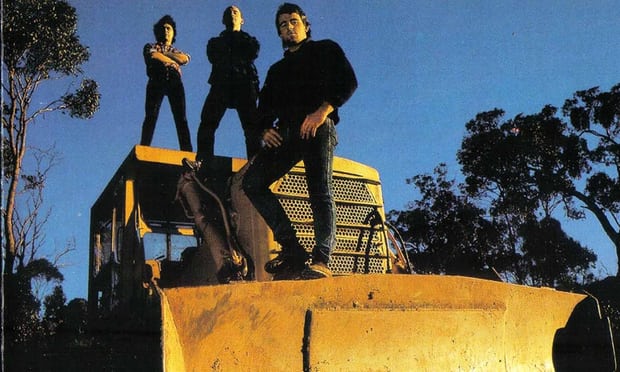 The transformation of Melbourne’s inner suburbs got underway in earnest in the late 1980s, but Port Melbourne in 1990 – like Fitzroy, Collingwood or North Melbourne – retained a kernel of working-class culture for maybe a decade more before the pips squeaked. It was in Port Melbourne at this time that I met Colin, my sister’s then boyfriend, who was working as a wool sorter a stone’s throw away and who would introduce me to the unique world of the Cosmic Psychos through his heavily punished record player.

Like Colin, the Cosmic Psychos originated from the world beyond zone three, in parched rural Victoria, but found their musical home in inner Melbourne during the 1980s, particularly St Kilda (the long abandoned seaside resort of Melbourne’s affluent 19th century classes) which then convincingly held the title as Melbourne’s cultural Sodom. But like Colin down at the woolsheds, the Psychos never made the complete transition to urban life, lead singer and bassist Ross Knight remaining down at the farm.

But this is what makes the Cosmic Psychos unique in the Australian music scene – they were a bridge between the seediest cultural elements of inner Melbourne and the blokey alienation of rural Australia. It’s often forgotten that not everyone in rural Australia is a rusted-on conservative or card-carrying member of the National Farmers’ Federation. Like the city, each town has its enclaves, which sometime spawn something unique.

The Cosmic Psychos are such a product, with a foot planted in the urban and rural world without surrendering to either – they pick what they like from each and that is their special appeal for fans. Seattle, as a geographic black hole for American rock bands, may have produced grunge, but the Psychos had to fashion their own unique brand of yobbo-rural punk for themselves.

When the Cosmic Psychos released Go the Hack in 1989, it was on high rotation in Albert street. She’s a Lost Cause was unmistakably punk rock in its fuzzy, wah-wah guitar assault and punchy if laconic vocal delivery, but clearly not cut from the same fabric as moral punk disorders like Henry Rollins or The Dead Kennedys. In the vocals was unalloyed doggerel, totally unaffected and unapologetic, accompanied by a visceral wall of heavy riffs and guitar feedback, tailor-made for smashing down beers after a hard day’s work.

She’s a Lost Cause remains the most renowned track from the album (it would go on to be covered by riot grrrl group L7) but Back in Town is more emblematic of the Psychos’ unique place in Australian punk-rock history and will probably remain the last linkage to a cultural phenomenon which was already strange: rural-based punk rock. While much punk fare emerged from art schools and universities, the Cosmic Psychos were adamantine, quartz-hard and self-hewn.

One only need look at the album cover to understand what a unique outfit they were and are. How many punk-rock albums show band members standing on top of bulldozers, sporting skin-tight pale denim, windcheaters, mud-cloven work boots and non-ironic mullets? Bands like The Sailors with their mannered, macho bravado could only ever hope to emulate the genuine article.

The idea of hard working lads making an assault on the city from “old Footscray” to “going to kick a few heads/going to have some fun” is the theme of Back in Town and there is no subtext. The sentiment is echoed through their whole catalogue of albums and will never count as high art, which is probably why it is so engaging for their small legion of fans, which have included Buzz Osborne from The Melvins, Kurt Cobain, Eddie Vedder, Colin and yours truly.

Listening to it won’t lead to any epiphanies, but there’s much to enjoy from the raw energy it offers in a world full of rock produced within an inch of its life.